I Have Arrived, I Am Home 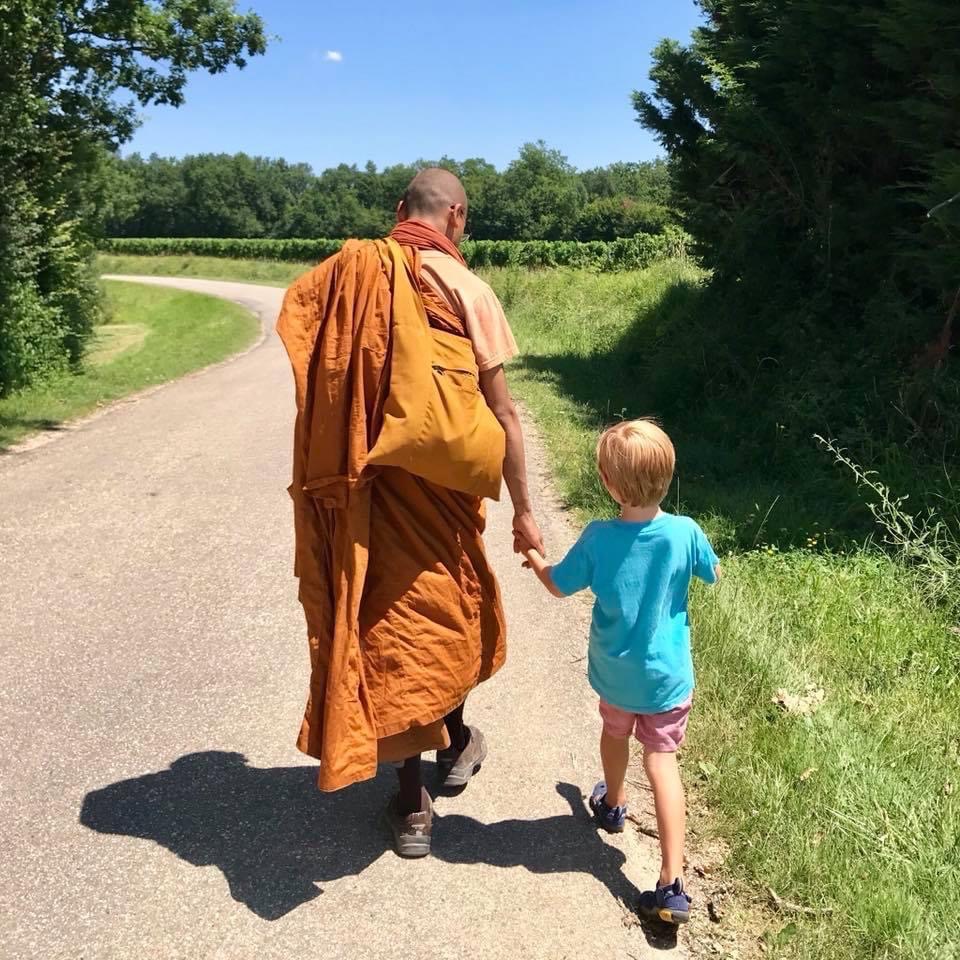 From the outset of our worldschooling life, Eirik and I aimed to share with our children the wonder of discovering the world around us, to spend quality time together and to fully engage in life as a family. We hoped to cultivate in our kids, as well as ourselves as parents: creative problem-solving in the face of obstacles, the ability to achieve balance, the fortitude to always try again, humility and a recognition of our own privilege, an appreciation for diversity, sincere gratitude, and a visceral connection to the joy and goodness of people no matter their nationality, race, religion, education or social class. All these values and aspirations are embodied in Buddhist principles and practice. And although we tried to lightly incorporate such practice into our children’s upbringing—for instance with our efforts to meditate together—the uptake was spotty.

Somewhere in the course of our travels, I learned about an annual family retreat at Thich Naht Hanh’s Buddhist monastery in France. Thich Naht Hanh was a revered Buddhist monk and peace activist. In addition to playing an important role in promoting peace between the West and his home country of Vietnam during the Vietnam War, Thich Naht Hanh also became internationally renowned for his efforts to make Buddhist teachings accessible and meaningful to regular people in modern daily life. When he was exiled from Vietnam in 1966 for visiting the US to meet with Dr. Martin Luther King, Jr., Thich Naht Hanh settled in France and eventually established the Plum Village monastery. Every summer, the monks and nuns of Plum Village (including “Thay” himself) opened (and still open) the monastery to families from all around the world to come learn, practice, play, camp and engage in a vibrant community of mindfulness. This sounded to me like an inspiring, eye-opening and supportive experience for us as a family, so I signed us up.

A couple of Thich Naht Hanh quotes sum up the essence of mindfulness:

“Yesterday is already gone. Tomorrow is not yet here. Today is the only day available to us; it is the most important day of our lives.” --Thich Nhat Hanh

“If while washing dishes, we think only of the cup of tea that awaits us, thus hurrying to get the dishes out of the way as if they were a nuisance, then we are not "washing the dishes to wash the dishes." What's more, we are not alive during the time we are washing the dishes. In fact we are completely incapable of realizing the miracle of life while standing at the sink. If we can't wash the dishes, the chances are we won't be able to drink our tea either. While drinking the cup of tea, we will only be thinking of other things, barely aware of the cup in our hands. Thus we are sucked away into the future and we are incapable of actually living one minute of life.” --Thich Nhat Hanh

Traveling forces us to be present. When we are surrounded by the same sights, sounds, smells and sensations all the time, we tend to stop noticing them. No matter how wondrous they may be in and of themselves, the repetitive context of our daily lives can easily become a bland background to a little parade of life events that, for better or worse, stand out in relief. I love the way new places jolt us to attention, make us stand up and take notice—as I did with the birdsong and the peddler’s call in the morning in India, the monkeys and hermit crabs emerging all around us when we stopped to pay attention in Costa Rica, and humanity’s intergenerational will and cooperative capacity to create the colossal beauty we were fortunate to see in Machu Picchu, in Hampi, in Bhutan, in Sicily.... Travel can heighten our awareness of the impermanence of people, places, objects and everything else in our lives, or simply the actual taste of a fresh-picked plum. When our context changes, as it does through travel, we cannot help but be present in the current moment. That presence is what Eirik and I sought when we opted to step out of our suburban California lives, and our years of nomadic explorations had definitely delivered on that promise.

But did the kids even need the travel in order to be in the moment? Their travel blogs revealed their natural inclination to focus almost myopically on the right now: a coati darting across Big Eyes' path, Sashay's fort with the coconut shell as a plate, Smiley's Playmobil farmer girl and her cats (and not so much the corresponding broader-brush experiences of visiting a live volcano, being plunged into a rustic life in a new language in a tropical village, or the traumatic hiking accident involving stitches). Unlike us adults, the kids appeared perfectly equipped to live fully and almost exclusively in the moment no matter where they were. What is the mental perspective that makes that possible, I wondered, and when in life does that muscle wear down, get lost, fade away? And how can we build that capacity back up and keep it alive?

We visited Plum Village for the first time in summer 2017. One of Thay’s essential teachings particularly touched me that summer: “I Have Arrived, I Am Home.” The idea behind this poetic self-reminder is that because the current moment is the only moment we can fully inhabit, no matter where we go or what we are doing, we are home. By steering our minds away from the replay of yesterday or the rush of plans for tomorrow, we can pause our searching, longing and running and invest fully in the here and now. During the retreat, we practiced “I Have Arrived, I Am Home” during walking meditation through the woods for an hour at a time. With each and every slow and intentional step, we would strive to “arrive,” to feel settled and at peace, to be at home, as though aha! here was our precise destination all along, and regardless of whether I ever leave this spot, I am fulfilled. Importantly, Thay would emphasize that “I Have Arrived, I Am Home” is not a statement or an aspiration, but rather: a realization.

Surrounded by the support of the Plum Village sangha—its crystal-clear monks and nuns, warm multicultural parents and grandparents, joyful children frolicking by the lotus pond—I had that realization. I realized that “arriving home” was what we had wanted to do all along our travels. We wanted to immerse ourselves in new places whose differences would keep us attuned to the here and now, and we wanted to be active participants alongside our children in life and learning. I realized that “arriving home” was something we had actively done in each place we landed—through making local friends, learning the language, practicing the local customs, eating the food, wearing the clothes and dancing the place’s dances. I realized that in those moments when we found flow, managed a graceful balance, or when our worldschooling days felt blissful, it was because we had arrived, we were home. And finally, I realized that if we had succeeded in arriving home in all those instances these past two years, then the fact was, we were home, we had arrived, no matter where we were. And that should include wherever we were if we never took another step.

Now, I will admit that this was rather a long detour for someone like me, a girl from Kansas, who might just as well have learned it from her homologue Dorothy in the Wizard of Oz. Dorothy, as you may recall, lived many grand adventures in Oz all while pining and searching for “home”—only to discover at the end that she had had the power to go home all along. However, as Glinda the good witch explains, “She wouldn’t have believed me. She had to learn it for herself.”

As the five of us prepare for our first return visit to the US in four years, I am thinking a lot about "home". I am eager for that brief, discombobulating window of reverse culture shock, that through-the-looking-glass feeling, where we get to see all those things we thought we knew so well with brand new, incredulous eyes.